Craig Denton talks about Hallam on and off the pitch 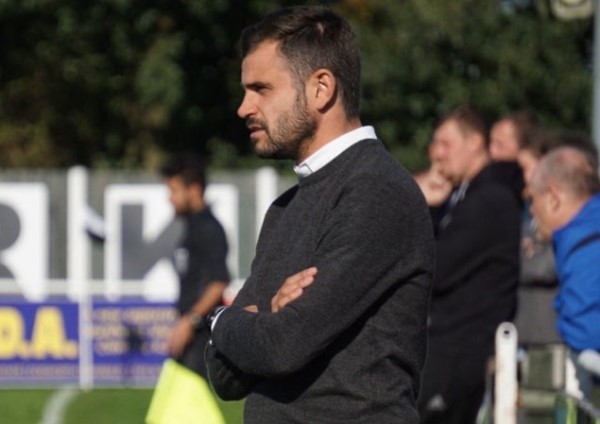 Hallam FC manager Craig Denton has expressed that the family-friendly atmosphere that we provide around the club can help us push forward, both on and off the pitch.

Earlier we spoke to Craig to get his views on the club as a whole and his ambitions for the future.

Craig stated, “For me, I’m someone who is looking to come into a great well-run club like Hallam FC. The big pull is their attendances and they are fantastic.

“That is down to Hallam playing a pivotal role in the community, who have a great affiliation with grassroots teams. There are Sheffield United and Sheffield Wednesday fans who are more than happy to come and watch a football match at Hallam when they have no fixtures.

“You pay a small admission fee, get a cup of tea with a pie and you’re able to watch a game of football knowing you’re going to get looked after. This is so important to any football fan in general, being able to bring a family member along to a game and be comfortable with the Sandygate surroundings and the warm welcome at Sandygate is what every visitor remembers.

“I believe this is why the attendances are always high, no matter where the club lies in the table. I believe that the Football Club will keep progressing both on and off the pitch and that plays a huge part in bringing in supporters.

“I’ve had phone calls recently with people in and around the club and a phrase that sticks with me is ‘success isn’t always league positions, success can also mean what the club offers in the community and to volunteers.’

“I think that sums Hallam up perfectly if I’m honest, first and foremost the foundations off the pitch are spot on and that can only bring positivity.”

“I think that is such a huge plus for a manager who is local and who wants to progress within the club. Both for myself as a manager, and for the club, because I want to add as much as I can to it. ‘’

“The club are looking to improve on the pitch just as much as we are improving off it and that’s what made me accept the job offer immediately.”

Craig, who has previously managed at Rainworth MW, Worksop Town and Barton Town discusses the importance of bringing the same group of people who have previously been in his management staff to Hallam.

He said, “Obviously Rob Watson who I worked with at Worksop Town and Barton Town has now taken over the reins at Barton, which I fully encouraged him to do.’’

“This means I get to work with Rob Poulter again and it’s great knowing that the staff have vast experience and are highly qualified as coaches. Rob is an A licensed coach. Wayne Thompson has been with me for quite a long time now and he knows Hallam well, James Humphreys who is my goalkeeping coach has also been with me for a while’’

“They’re a bunch of honest, reliable and supportive people which plays a part in any success that I have, and I direct that back to everyone involved with me. The players and the club are all working hard together, and we’ve also made Ryan Hopkinson an addition to the coaching staff. ‘’

“He was part of the excellent Worksop U21’s set-up and followed me to Barton. He is a great up and coming coach who works with the Billy Sharp Academy. He believes in player development and, ultimately, he is another string to our bow which will make us stronger.’’

“To answer your question, I think it’s vital that I have the same people around me. We all trust each other; we don’t always get along and we do disagree from time to time but any management team is like that. It makes us stronger and, the stronger we get, the more effective we become.”

Finally, Craig discusses how the club have interacted with him since his arrival and the advantages of being local, which aids the knowledge of his player pool.

He said, “Everyone at the club has been absolutely fantastic since my arrival and I’ve had a lot of contact with the President, Uriah Rennie who has been extremely supportive.’’

“In regard to the operational side of the club I’ve spoken a lot to Richard Pillinger, the new Chairman and Steve Basford, who is going to be doing another role at the club as Commercial Manager and Sharon the Finance Director too, they’ve all been amazing.”

“It is a club which I have visited many times to watch games and it oozes class and a family-friendly atmosphere. I would say that my player pool around this area as well as the whole of the NCEL is quite strong.’’

“There aren’t many players that I don’t know around the Sheffield/Yorkshire area and that’s down to the intensive work that me and my team do. We go out and watch games and I think being local is a highly important element which will in turn, allow us to build a good squad and hopefully that helps us win matches.”

Craig Denton was talking to Mitchell Radford at Hallam FC