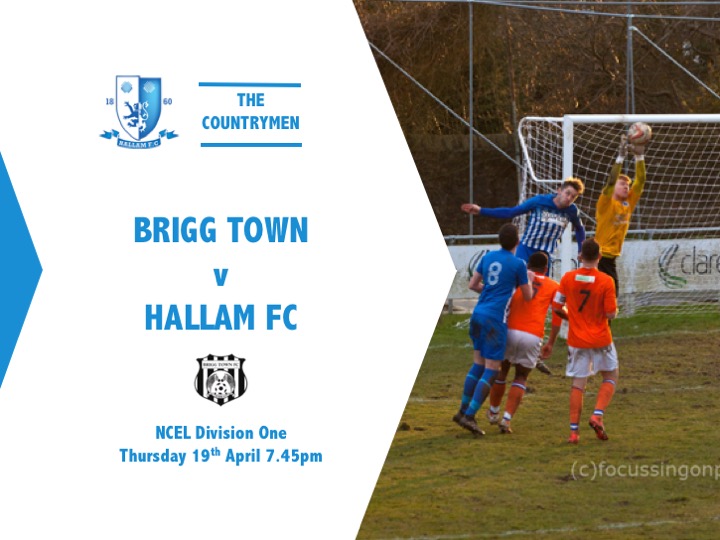 Hallam were left ruing an opportunity spurned as Brigg Town scored two goals in six second half minutes to come back from the abyss and salvage a point at The Hawthorns against the play off hopefuls.

The Countrymen welcomed Garth Griffiths into the side after a lengthy lay off as Tuesday's hero Jake Currie took his turn on the bench.They was also starts for Ollie Beaumont and Liam Flint.

On a glorious evening in Lincolnshire, the game started at a scrappy tempo as both teams failed to take a grip on proceedings. Beaumont registered the first real chance as he turned and smashed a shot over.
Hallam would reap reward in the 28th minute when Sam Smith was adjudged to have being pushed in the box and the indispensable Mitchell Dunne strolled up and convert the penalty.

Dunne could have bagged a hat trick before half-time with two further openings. First, his rasping drive cannoned of the bar and then minutes later he found himself one on one with Brigg keeper Shaw, but when the hosts number blocked, Sam Smith could only see his effort go wide from the rebound.

Brigg were more of a threat in the second phase but 12 minutes in, Hallam were two up as Dunne was again on goal and this time, he made no error as he rounded the Keeper to score. The Magpies were back in it on 67 minutes as Scott Neary netted after which Hallam made a double substitution to shore up the beach.

Things got better for Brigg in the 74th minute as they forced an equaliser, as Jack McCarthy put through his own net, which many thought couldn't possibly materialise just ten minutes earlier.
And just to compound matters, Sam Fewkes was sent off reducing the visitors to ten men.

No further noteworthy action to report so it's a point for Hallam but it really should have being all three and The Blue and whites remain seventh in the league. No time for dwelling as The Countrymen host Eccleshill tomorrow ( Saturday), ko 3pm.