Honours even in Sandygate Stalemate 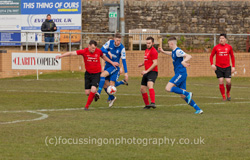 In a mirror image of the reverse fixture at the Fast Frame back in January, defences dominated in a goalless encounter between Hallam and Ollerton Town at Sandygate yesterday, write Ian Jones and John Wiseman for www.hallamfc.co.uk. The draw keeps the Countryman in eighth place, but they are now fifteen points adrift of that vital fourth and automatic promotion berth in Toolstation NCEL Division One, albeit with three games in hand on North Ferriby. Another useful point for Town takes them up to 14th place.

With skipper Sam Smith and Tom Wilson up front for the hosts, and watched by another good crowd of 229, it was Wilson who went close with just a minute played; but Ollerton, through Sam Foulds and Kyle Ludlow, had two decent chances just five minutes later. A deflected Wilson shot, well saved by Town’s Levi Owen, was the only other real opportunity in a first half badly affected by blustery conditions, and the teams went in level at the break despite an excellent performance from Harry Bamforth in the home midfield.

The second half almost got off to a sensational start when Brandon Shaw’s header beat keeper Own; but the Ollerton stopper was mightily relieved to see the ball evade the frame of the goal.

Tom Roebuck headed wide from a corner on the hour mark, but with twenty minutes left, Ben Partridge was put through by Foulds, but his shot found the side netting.

Hallam’s Management team of Stephen Whitehead and Ryan Hindley threw on Alex Rippon in search of a winner, but, as the clock ran down, Julian Lawrence brought down Partridge who seemed to be through on goal. Referee Glenn Whitehead showed a yellow to the home centre back, but an incensed Ollerton Manager, Dave Winter, argued so strongly about what he saw as a red card offence that the referee showed a red card to the Town gaffer instead.

Time ran out to confirm 180 goalless minutes between the sides this season in the two fixtures, as a well-organised and battling Ollerton secured another important point

When the dust had settled, Ian and John caught up with Joint Manager Stephen Whitehead

Stephen, two games with Ollerton away and home and not a goal in either. Sum up today's draw for us.

It comes down to 3 clear cut chances which we created but never made the keeper make a real save. To beat teams that come to defend and make it hard for you then you must take the opportunities when they come along. Sam’s header in the middle of the 6-yard box is bread and butter for him and he’s put it over the bar same with Boothy’s; those must go in and when Jack is through, he blazed high and wide. If you don’t hit the target you won’t score- that’s why it was 0-0. They never really threatened us apart from the long throw which I thought we defended well.

Who did you think did well for you today?

The back 3 -then 4 when we changed- were solid and never looked like conceding; and another clean sheet for Levo. Bamf got the MOM so that shows he played well too.

Winterton up next in what should be a cracking game. What would you say to anyone turning up on Tuesday?

That this should make for a great advertisement for the league and with the addition of a new striker we have a great goal threat. It’s taken me a while but finally it’s a Dunne deal! 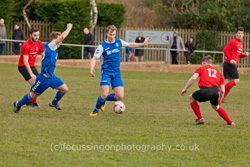 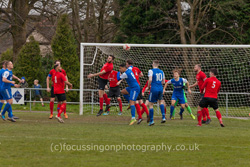