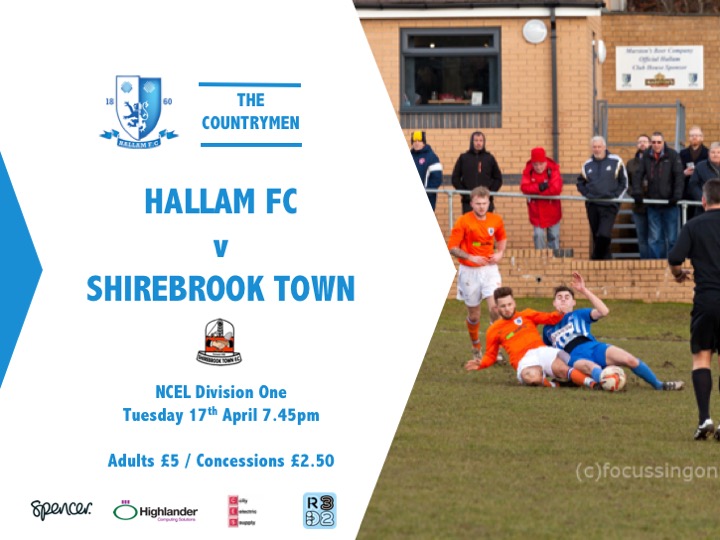 Jake Currie struck a wonder goal, six minutes from time to preserve Hallam's long unbeaten run and rescue, what could be a crucial point for The Countrymen.
Hallam put out an unchanged eleven who started the gritty win at Dronfield on Saturday, as the match commenced at a fairly modest pace.

Mitch Dunne brought the first chance of note as his drive was brilliantly tipped over by the Shirebrook Keeper Squires. Hallam were growing into the contest against their fellow play off hopefuls and keen to strike a blow first.

But it was the Nottinghamshire outfit who struck first with three first half minutes remaining as Alex Varley found the net, maybe slightly against the run of play to give Hallam food for thought approaching the interval.
The Countrymen management responded by making a double change for the second half bringing on Ollie Beaumont and Liam Flint for Sam Fewkes and James Reed respectively, to freshen up attacking options.

Hallam could have fallen further behind, had it not been for a superb double save from Dave Darwent, half way through the second half as Ben Thornton made way for Micah Bishop in the final roll of the dice for the hosts.

And on 84 minutes, Currie popped up at the right time to spectacularly fire an over head kick, into the Shirebrook net and send an impressive midweek crowd of 210 into raptures. As the man in the middle blew time on another engrossing encounter, Hallam extended their unbeaten feat to eleven games.

It was a gritty point for Hallam in their quest to seal a top six spot and at the business end of the campaign, the games are coming thick and fast as The blue and white army travel to Brigg Town on Thursday Evening in one of several rearranged fixtures for The Countrymen to negotiate, KO 745pm.