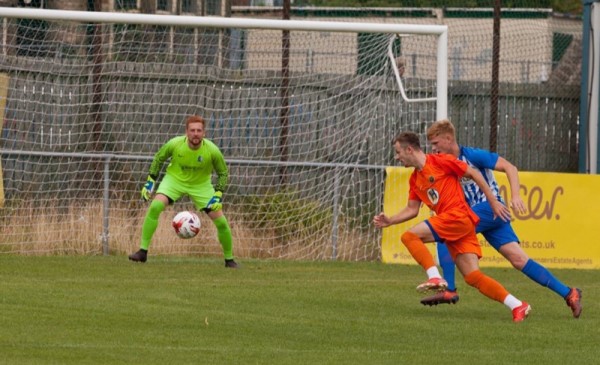 Name: James Leverton
Age: 19
Where were you born:
Rotherham
Where do you live:
Retford
Occupation:
Goalkeeper Coach at Doncaster Rovers Academy, owner of Premiergoalkeeping.co.uk
When did you join the club:
Straight after the Frecheville Davy match
How did your move to Hallam come about:
I trained last season a few times at Hallam so I got to know Wippy then, he then messaged me when he was short of a keeper this season and I was thrilled with the opportunity.
Usual position played
Goalkeeper
Previous Clubs played for & Honours:
Academies ( Barnsley FC, Manchester United, Wolverhampton Wanderers, Leicester City, Derby County and Doncaster Rovers)
Semi- pro (Belper Town, Handsworth, Ollerton)
Honours (Winning the Blades cup with Derby County against Liverpool on Sandy Lane).
Did you know any of the players before the move:
Yeah I knew Tyler, JT and Jas from Handsworth, All top lads !
Best friend in the team:
Probably Jas as he was my old gaffer at Handsworth and has been recently on the same coaching course as me.
How are you finding things so far:
It’s been a great start I can’t thank The staff and players enough for welcoming me into the group, it’s a great bunch of lads.
Do the rising attendances have any effect on the players:
I don’t think they ever have a negative effect on anyone because that’s what we do it for to play in front of the big crowds and Hallam definitely get that. It’s a massive boost for us having that great support.
Do you have a target for this season:
My personal target for this season is to establish myself as the number one at Hallam and get as many clean sheets as I can as for a keeper there’s no better feeling.
Team target is definitely promotion, a club as big as Hallam deserves to be in a higher division.
Team supported other than Hallam:
Sheffield United
Best ground played on:
Bramall Lane
Most memorable game played in:
Got to be Hallam vs Sheffield United, over 1,000 in attendance and getting to play against a very strong Sheffield United team
Most memorable Hallam game played in:
As above
Any Pre match rituals or superstitions:
Definitely, I have to wear the same shirt to travel in underneath my tracksuit and also can’t have my dad ask “are you up for it?” Because everytime he does I have a howler.
Does the slope of the pitch have any bearing on the game:
Luckily it doesn’t have any effect on me as I’m not the unlucky one running up it every minute, but obviously if you’re kicking downhill you’ll always have an advantage but Hallam are used to it so definitely makes Sandygate a difficult place to come for any opposing team.
Do you do any research on opponents or just concentrate on your own game :
We definitely just have our game plan and stick to it. Let them worry about us.
Is there a team target for the season:
Promotion
Any standout moments whilst playing for Hallam:
The save against Leon Clarke wasn’t bad
Do you practice taking penalties:
I do actually, only as a muck about but I’d fancy myself to score in a penalty shootout if it ever came to me taking one.
Whats your ambition in Football:
To play at the highest level I can for as long as I can.
Whats your ambition in Life:
To be successful in whatever I do and enjoy what every I do.
If you won 2 million pounds on the lottery what are three things you would do:
1. Buy a house
2. Pay off the heaps of student loan I have
3. Build Premier goalkeeping up
Anything else you would like to add:
Up the countrymen!!!
Prev Next