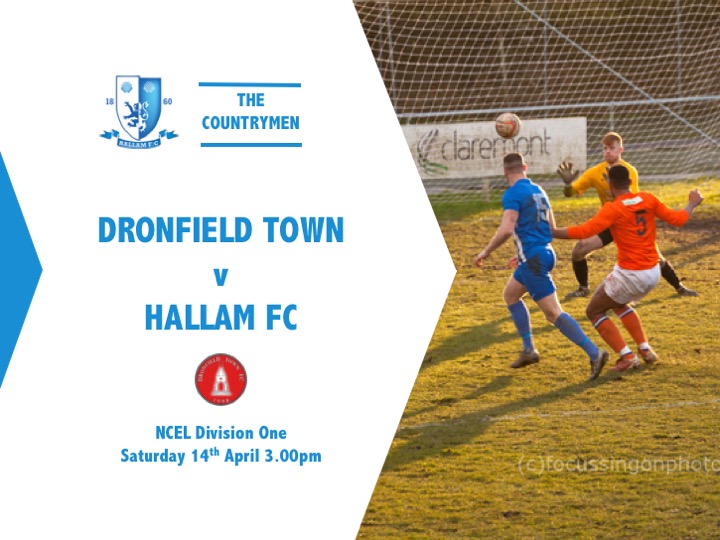 Ruthless Hallam battled to a hard-fought win at the HE-Barnes stadium to notch up their eighth successive victory and keep the pressure turned up on the play off pack.

After a duet of postponements at Sandygate during the week, Hallam were keen to get on with the action and the weather gods, for once, obliged as the teams came onto the pitch under clear blue skies.
The contest started at a modest pace but Hallam did draw first blood in the 12th minute as James Reed played a corner to the edge of the box and Sam Fewkes met it with a crisp drive that eluded everyone, to put Dronfield on the back foot.

And Hallam doubled their advantage with ten first half minutes remaining when the Dronfield Keeper Jake Naylor made a hash of his goal kick and that let in Mitchell Dunne who did the rest with a assured finish to put the visitors in pole position for the victory.
And it could have being even better for the visitors from over the Derbyshire/South Yorkshire Border moments later as Dunne found space to launch one of his trademark runs but was denied by the Town keeper this time round.

Hallam were certainly bossing affairs against a Dronfield outfit who, back in November, condemned Hallam to their heaviest defeat of the season and more importantly, were keeping old boy Matt Ord and ex Staveley hotshot Callum Mawbey quiet for the Hosts.
Town, to their credit did come out with more assertiveness in the second period and Mawbey's effort brought out the best in Dave Darwent to preserve Hallam's two goal cushion.

Affairs became tempered as Sub Connor Greaves received a yellow for a late tackle and handbags were thrown at ten paces but Hallam recomposed to launch another attack on the Dronfield goal. It was one of them conclusions that you thought, if Dronfield could sneak one then it was game on.

But again, Dunne found an opportunity late to seal the game but was denied by an on rushing Naylor and just seconds later Sam Smith was denied by a triple save from Naylor but two goals was enough to ensure the three points went home to Sheffield and with it, a ninth clean sheet in the league this season. A busy week follows with three games crammed into the next seven days, but first up will be play off hopefuls Shirebrook Town at Sandygate on Tuesday Evening 745ko.